The Next Big Thing Blog Hop

A fellow Minnesota author, Joe Hart, invited me to participate in a blog hop today.  Of course, I was flattered and honored, so I accepted.  You can (and should!) click the following links to learn more about Joe and his books.

His Next Big Thing: http://authorjoehart.blogspot.com/2013/01/the-next-big-thing-blog-hop.html

So, today I’ll be answering ten questions about Rebecca, my new novel that just launched, that include a fair bit of detail about the reasoning behind my decisions and other intriguing bits. Joe has done the same thing about his new novel, Singularity, at the link above, and the authors I contacted will be doing the same next week, at the links below. END_OF_DOCUMENT_TOKEN_TO_BE_REPLACED

Rebecca was published on Tuesday, right on schedule.  There’s a snazzy link to it right here.  Once again, I forgot to make a blog post when I uploaded it, so here I am.  : )

I am anxious to see what people think of this one.  When I say it’s a “companion piece” to Alex, what I mean is that a lot of elements are similar, but they are used in a different way to explore different themes.  Now, this might just be me being a little too introspective on a Saturday morning, but the ideas have been bouncing around in my head for awhile now, so I thought I’d share what I mean by that. END_OF_DOCUMENT_TOKEN_TO_BE_REPLACED

Just a Little Goody For a Friday Afternoon 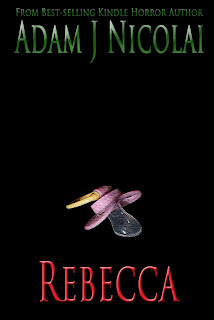 If you follow me on Facebook, you’ll have already read most of this.  Apologies in advance.  I’ll take this opportunity to remind everyone that when it comes to marketing, I have no idea what I’m doing.

That said, here I am, hat in hand.  I have three huge favors to ask. If you did any one of them, you’d be doing me a solid.

Rebecca, my second novel, will be available on Amazon on Tuesday.  It’ll be five bucks for the Kindle version.  If you’re thinking about buying it, it would sure help me if you bought it on Tuesday. : ) Since I’m an independent author, Amazon won’t let me set up pre-orders, but the bigger the “punch” I can make that day, the more momentum I’ll get, and the better overall sales for the month will be. END_OF_DOCUMENT_TOKEN_TO_BE_REPLACED

Rebecca Will Be Available January 8th, 2013

A lot of you probably already knew that, but I’m posting it as my blog post title so that it shows up prominently in all the primary places where my blog posts are linked.  Aren’t I sneaky?  I’ll get the hang of this whole marketing thing yet.

I’ll be publishing Rebecca through KDP Select, meaning Amazon Prime members will be able to borrow it for free on day one.  That also means the e-book version will be available exclusively through Amazon for at least three months (probably longer).

I can’t promise the paperback will be available on January 8th, but I will be working to get it out there as quickly as possible.  Targeting no later than EOM January. (That’s “end of month” for you non-project management types.  Which is probably most of you.)

Beta reader feedback is coming back and by and large it has been pretty positive.  This is definitely a different book, but you’ll be able to tell who wrote it.

I’ve got some big updates.

First, I’m going to be incorporating an LLC to do all my writing business through.  I’m tentatively planning on calling it “Lone Road Publishing.”  Pretty much every book I publish from here on out (barring a zillion dollar advance offer from some giant publishing house) will be published under Lone Road.  This is exciting because it lends an air of legitimacy to this whole endeavor that I really appreciate.  It’s gonna have a standalone bank account.  The whole enchilada.  Pretty exciting.  : )

Second, I have a final schedule and release plan for both Rebecca and Children.  My original plan, to release them both at once, is right out, but they will be coming out within four months of each other.

Why do I sound so confident you ask?  Just trust me, this is a plan I will be sticking to, at least as hard as any big publishing house would be sticking to theirs.  This isn’t just me shooting in the dark; it’s a bona fide RELEASE SCHEDULE.  Trust me.  I have spreadsheets and everything.

So, here’s how it’ll play out:

Rebecca will be released late December 2012 / early January 2013.  The rough draft will be done by the end of October.

Children will be released late April 2013.

I had really hoped to get Rebecca out earlier, but it just isn’t going to happen that way.  I was too excited watching Alex develop, and didn’t have the mental fortitude to put time into Rebecca in the volumes I needed to.  This schedule is an honest assessment of how much I can write each week, and I’ll be able to keep it.  Wish it could be quicker… but at least it’s honest.

I’m really psyched about being able to put Children out so quickly after it though.

That’s it for now – time to put chilluns to bed!

Hit the 20,000 word mark on Rebecca tonight, which puts me at roughly 25% on the first draft.  It’s not coming along as quickly as I’d like, but for how complicated a story it is compared to Alex, and how little time I have to write, I’m still happy with the progress.  It’s weird trying to get into the head of this character.  She is not as easy to write as Ian was, because of how different she is from me.  It’s an exercise in empathy.  Hopefully it’s panning out.

In other news, I posted another free promotion day for Alex today.  So far I’m at #265 in the overall Kindle Store, #3 in Ghost Horror, #11 in Horror, #12 in Suspense, and other numbers as well.  I wasn’t expecting numbers that strong.  We’ll see if it translates to another bump in sales afterwards.

Spent the evening working on Rebecca.  It’s really hitting its stride now, I think.  All the major themes are introduced one way or another.  The main character is well established – love her or hate her – and I’ve written a couple chapter endings that made me just stop and ponder, a little sickened and a little elated.  I always figure if my own writing is making me draw up short, I’m doing something right.

There are two primary supporting characters, and one of them gets introduced in the next chapter.  So I feel like I’m making real progress in that respect, but more importantly…

Rebecca has a lot of themes in it, and I’ve been worried that there may be too many.   I’ve debated cutting one or two and making it more of a focused story, like Alex was.  The problem is, all the themes really do tie together, so figuring out which one to cut was tricky.  This past weekend, while writing, a couple passages occurred to me for the final few lines of the book.  I took note of them.  They were good… but the reason they were good is that they delivered on one of the themes.  This helped me realize which theme was most critical.  (Not surprisingly, just like Alex, the most critical theme is a parent’s love for her child.)  This, in turn, really helped me figure out what to do with all the other themes.

The overall idea is basically this:  the main character, Sarah, is learning how to love her daughter.  But she can’t do that without learning to love herself first.  And let’s put it this way… there is a lot of stuff in the way of that.

With the basic thematic roadmap out of the way, I feel like the only thing standing between me and finishing Rebecca is time.  This is a really exciting feeling.  I remember when it hit with Alex, and it was a thrill.  Now, I just want to write like a madman until I get it wrapped up!

Speaking of Alex, the past couple days have been a bit depressing.  After Alex’s awesome performance last week, sales just plummeted the past few days.  I couldn’t help but notice that this coincided with the book’s drop off of the horror bestseller page – both in the “Top Rated” section on the right, and the list itself.  I’ve been trying not to freak out about this.  I figured what comes up must come down, and if it went up once, it can probably go up again.  The recent revelations with Rebecca also help me keep this fluctuation in perspective, because I have something to direct my energies toward besides obsessively checking Alex‘s sales.  : P

Good news, though.  Alex is back in the “Top Rated” section for horror (for the moment, at least)!  It’s up to 54 reviews and still holding a perfect 5.0/5 rating.  Interestingly, I noticed this not because I’m checking the horror bestseller page constantly, but because I suddenly sold three books, and I thought, “Huh, I wonder if…” and sure enough, there it was.  : )

If you’ve read Alex, enjoyed it, and helped me out with a strong Amazon review, I can’t say it enough: